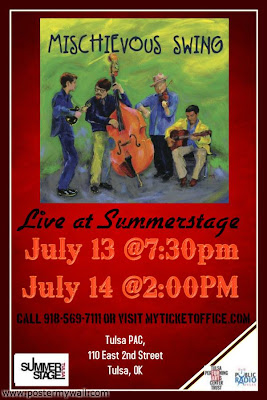 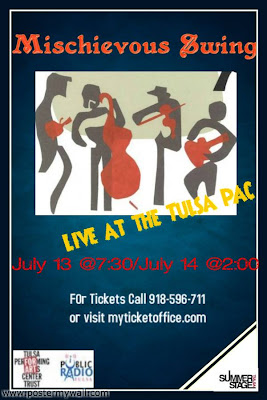 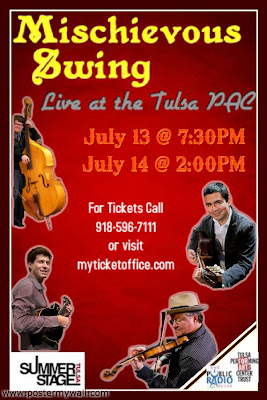 Posted by Unknown at 5:35 PM No comments:

Greetings. We are so thrilled by the outpouring of support we have received over the past 6 months and we have tons of exciting news to report. Our facebook page has 747 likes, our first youtube video has been viewed over 1,700 times, our website has been updated, our debut album is available on itunes and cdbaby. Additionally, we have some special news to convey to all our Tulsa fans as we will be playing the Tulsa Summerstage July 13th and 14th, and will be opening for Cowbop at the Jazz Hall of Fame July 23rd.

IN THIS ISSUE
-Provide details on Upcoming Shows at the Jazz Hall of Fame and Tulsa PAC
-Provide the Inside Scoop on first mini-tour
-Interview Nathan, as part of the 2nd  installment of our 4-part series on the members of the band
-Provide Sheet Music for the our intro for "Avalon"

TO DJANGOFEST AND BACK
Mischievous Swing's first series of shows outside Oklahoma was a smashing success. We arrived in Indiana on the Thursday, the day before our first show. At the home of Mark K., we  were treated to a wonderful home cooked meal and got to jam with some of the finest acoustic swing players from the area. Friday, we played at the Hedgehog. The venue was wonderful and the people who came out were kind and very receptive to our music.
After our show Friday night, we backed up the van and drove through the night to get to York, Pennsylvania to play the Django Gypsy Fest. Our show went well, receiving a standing ovation and throughout the day Mischievous Swing band members were asked to join various acts on stage, including Frank Vignola.
INTERVIEW WITH MISCHIEVOUS SWING BASSIST, NATHAN EICHER
We are excited to bring you the second part of our four part series interviewing the band members of Mischievous Swing.
Mischievous Swing bassist Nathan Eicher brings a unique musical perspective to the role of jazz bass. At age 26, Nathan has a Master's degree in jazz studies and has played music of many varieties, including, classical, bluegrass, funk, country, western swing, jazz, dawg and rock. He has performed with various renowned artists inducing, Whit Smith (Hot Club of Cowtown), Patti Page, Marvin Stamm and Frank Vignola. We are thrilled to sit down and talk with Nathan.

Who have been your major influences?
It is a pretty diverse list. I have been a big fan of the pianist Oscar Peterson since I was very young, and on all of the albums I listened to as a child, Ray Brown was the bassist. Once I took up the bass, I really gravitated towards Ray as my model for what a jazz bassist should sound like. I grew up listening to a lot of acoustic music and there are two bassists from that community of musicians that I really admire. The first is Edgar Meyer. He really clued me into the idea that the bass could be far more than a supporting role, especially when played with a bow. Additionally, he has a fantastic tone, and a virtuosic command of his instrument. Second, there is Barry Bales. He is really on the opposite side of the spectrum from Edgar, in that he never takes a solo or plays anything that could be considered flashy or complicated. However, like Edgar Meyer, he is super solid. Barry, does that job that needs to be done, and it doesn't come with any glory, I feel like bassists need someone like that to look up to, because many times that is your role.
After bassists, my second biggest influences have been fiddle/violin players. Aubrey Haynie, Stephane Grappelli, Darol Anger and of course my dad were all guys I have emulated over the years. I always took the attitude that, if you take inspiration from people who play a different instrument than you, then you are much more likely to have a unique voice on your instrument. So while Edgar Meyer was the guy who opened me up to the world of acro (bowed) bass, I never wanted to sound like an Edgar clone. I always thought if I could bring fiddle to bass then I would be my own person.
Finally, there are all the other musicians/bands I grew up listening to and idolized, Chris Thile, David Grisman, The Rosenberg Trio, Joe Pass, Nat King Cole, Take 6, Jerry Douglas, Blue Highway, Ricky Skaggs and Tony Rice. All this stuff influences my playing, I am just not entirely sure how. Moreover, the list keeps getting bigger, like right now I am real big on Horace Silver.

You have been playing music with your family for many years, what has that been like, and what kind of music have you played?
I have had the opportunity to play with my family in numerous combinations. First, I played in my dad's bluegrass band, then there was the family band which played a variety of tunes, my Mom's jazz band and then my mom's country bands which included playing with her in the show "Always Patsy Cline".
In terms of  what that has been like, it has been incredible. In addition to the fact that everyone in my family is a tremendous musician, they have always surrounded themselves with stellar musicians, so it has been the best music education you could ask for. Moreover, whatever the music has been, there is nothing that compares with the special opportunity I have had to make music with my family. I know it has made my family closer, particularly with my brothers. I was 16 when we we started the family band, which meant that my brothers were 14 and 12. I don't know many 16 year olds who spent as much time as I did with my younger brothers, and that time was largely because we could make music together.

You studied music at the University of Central Oklahoma, where you received your Master's degree in Jazz Studies-Music Production, tell us a little bit about what you gained from the experience.
I was very fortunate to study at the University of Central Oklahoma. My time there really allowed me to hone my jazz bass skills and helped me develop many other musical skills that have made me a more rounded musician. In addition to playing bass in combos and a Big Band I also played cello in a combo, and piano in the Latin band. I arranged a big band chart, recorded, engineered, arranged and produced my own album, and I started getting serious about composition.
For more information about Nathan, you can check out his website, www.nathaneichermusic.com

FREE MISCHIEVOUS SWING SHEET MUSIC
This issue's free music comes from the introduction to our last tune on our album.